Philanthropy is commendable, but it must not cause the philanthropist to overlook the circumstances of economic injustice that make philanthropy necessary.
~Dr. Martin Luther King, Jr. 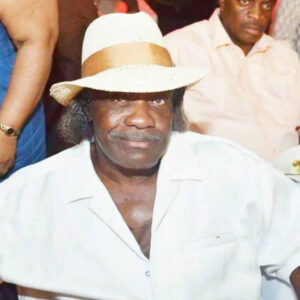 Feed Your Good Dog friend, Ricky Steele and, American R&B singer, Jo Jo Benson struck up a friendship forty years ago at a time and place when it was unlikely for such a friendship to develop, but against the odds it did.

Jo Jo Benson had a successful career he loved. So much so, and despite his failing health, he worked to put together one last show on New Year’s Eve. That last show was not meant to be as he passed away two days before Christmas at the age of 73.

Ricky says that Jo Jo, a Columbus treasure “helped create the music that is the sound track of my life,” and for that he is grateful. So grateful that when he found that there was no money to have a proper burial for a man who had, through his music brought joy to so many, Ricky started a fund raising campaign to raise the money to properly bury a man who helped shape his life. A mitzvah.

Ricky believes people that followed Jo Jo’s music or saw him on stage would feel good about getting involved. To join the effort, visit gofundme.com/jo-jo-benson.

… and for Peer Health Exchange

Peer Health Exchange equips teens with the knowledge and skills they need to make healthy decisions. This year PHE DC will reach 1,100 ninth graders attending public schools in the District. Behind this accomplishment is the investment of time by the high school students we serve, the tireless dedication of the college volunteers who teach teens our comprehensive health education curriculum, and the unwavering commitment of PHE’s partners and supporters. 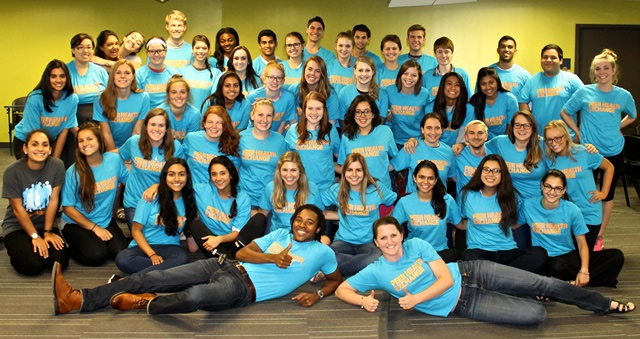 Much work is needed to improve the health and life outcomes of teens living in DC.

According to the 2012 CDC Youth Risk Behaviors Survey, among 9th graders in DC: 1 in 4 did not use a condom during their last sexual intercourse; 4 in 10 have tried marijuana; nearly 1 in 10 has attempted suicide one or more times.

Your time will strengthen our work.

Visit a workshop, weigh in on our local strategic plan, or volunteer your expertise. Contact Washington, DC Executive Director Kellye McKenzie kellye@peerhealthexchange.org if you want to learn more or get involved.

Please join us and support Peer Health Exchange DC at any level you can by clicking here.

Your contribution will help Peer Health Exchange DC continue its programs to ensure that as many local teens as possible have access to relatable and high-quality health education.

Collectively, we can make a difference!

The University of Georgia would do well to demonstrate leadership as set forth in the following quote by Douglas McArthur rather than fail to lead at all in the matter of Equal Access at the UGA Arch:

“A true leader has the confidence to stand alone, the courage to make tough decisions, and the compassion to listen to the needs of others. He does not set out to be a leader, but (a true leader) becomes one by the equality of his actions and the integrity of his intent.” ~ Douglas McArthur

The University of Georgia administration is missing out on a huge opportunity to demonstrate compassionate leadership by coming up with a permanent solution of Equal Access at the UGA Arch – a solution that would fulfill its own requirements and meet the needs of all it serves. UGA administration claims that a permanent ramp solution would diminish the historical integrity of the Arch. Translated…the three concepts provided by the students leading this effort (Make UGA’s Arch Accessible) did not appeal to them so they closed the case, and offered a once a year temporary solution. This despite overwhelming community support for them to do otherwise.

If you attend, or are thinking about attending, the University of Georgia then you know about the Arch and the time honored tradition of not passing under the Arch until you have graduated and received a diploma. One of the stops on a UGA college campus tour for an aspiring Bulldawg is the Arch. If you have mobility impairments and approach the Arch on your tour and you hear of the Arch tradition, you can’t help wonder how you will participate in the tradition if you are accepted, and graduate.

That was the very thought Carden Wyckoff, Marquise Lane and Khalid Alsafadi had when they toured UGA as high school seniors – each with their own physical challenges. All three of these young people are UGA undergrads today. Instead of hoping for things to change, and for someone else to make it happen for them, they decided to take matters into their own hands. At the beginning of this year, they began to lobby and petition UGA for Equal Access to the Arch. This in addition to maintaining their own academic and social schedules, as well as getting through their personal daily routines made more rigorous than most by their personal physical challenges.

Following are some of their efforts to date:

Despite these, and ongoing, efforts, UGA administration continues to deny permanent Equal Access at the Arch. UGA officials said that “After thorough review, the university has determined that there is no viable option for further permanent accommodation at the Arch that would not have an adverse effect by diminishing the historical integrity of the site.” Further, they said that “Previous reviews have determined that the Arch is accessible in its current configuration. People with disabilities may approach the Arch from the campus side, touch it, and have their photo taken beneath it.”

Based on their statements, it appears that UGA is worried about how the Arch would look should a ramp be put in place. Here are the three ramp concepts Carden, Marquise and Khalid helped to develop with UGA architects. Please click on image to see larger view. 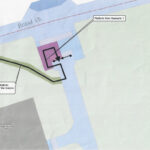 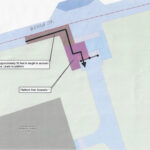 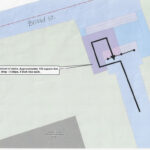 Further, UGA’s reasoning doesn’t address the issue of Equal Access, which would provide students with mobility impairments access to, through and around, the Arch from both sides just as UGA students without such impairments are able to do. In my opinion, their statement that the Arch is approachable from the campus side is insulting. Someone who is in a wheel chair, or uses a walker, or who wears special braces to be able to walk, who gets off of the bus on Broad Street at the Arch has the burden of going out of the way around the block to access the Arch. Take it a step further, it is unthinkable what happens if that same person is with a group of friends crossing Broad Street toward the Arch and Equal Access is not provided.

UGA agreed to a temporary structure in May at graduation. It is a start but not a good solution. Is graduation day the only time that someone with a degree from UGA may go through the Arch? I can see scenarios where Alumnae are visiting their children on campus, approach the Arch and joke about their ability to walk through the Arch while their children must go around to the sides. What happens when the Alumnae parent is in a wheelchair? Are they denied such a rare spontaneous family memory, or do they make the best of it and make their way around the block to access the Arch from the other side? 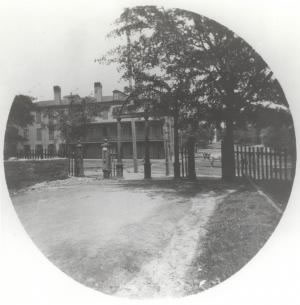 The pillars at the Arch stand for moderation, wisdom and justice. UGA would be wise to address the issue of Equal Access at the Arch and start looking at plans to rework the approach to the Arch that would be appealing to them and meet the needs of all it purports to serve. If you take a look at historical pictures of the Arch there were no steps. Steps and two electric lights were added in 1946, only 68 years ago. With today’s technological advances in construction and materials, together with new ADA policies, certainly there are cost effective ways to permanently alter the approach to the Arch from Broad Street that would not negatively impact its appearance. The good will rewards will outweigh any dollars spent. After all, the support for Equal Access at the Arch from the community, campus groups, students and media has been overwhelming. The only opposition to this effort appears to be from UGA administration.

Khalid Alsafadi put it well…”You have to give justice to all your students, not just the able-bodied ones. We all go through the same work and even have to go through more obstacles that we overcome, so we should be able to partake in the tradition.” 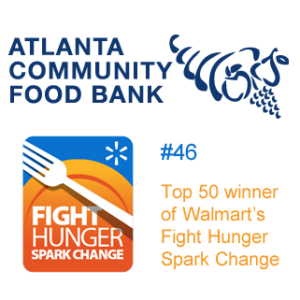 Great things are done by a series of small things brought together. ~Vincent Van Gogh

You cannot – ever – underestimate the power of one small act, such as casting a vote. Many, many thanks to all of you who voted and made the Atlanta Community Food Bank a top 50 winner of Walmart’s Fight Hunger Spark Change contest. In a nail biting finish and thanks to all of you, ACFB won $60,000 which will translate into over $552,000 in food distributed to hungry men, women, and children in our Atlanta area. WOW!

Ricky Steele, an ACFB friend, launched a Facebook campaign of his own with a continuous shout out to his friends to vote each day until midnight of Sunday, October 5 to push ACFB up the list. Ricky’s Facebook friends made the same request of their Facebook friends and so on until last night at midnight when the contest ended the ACFB ended up in 46th place. They will now receive the $60,000 to help feed the hungry of North Georgia. Clear evidence that a small act like casting a vote makes a huge positive difference in the lives of so many.

TGIFYGDF – Thank Goodness It’s Feed Your Good Dog Friday!
Volunteer Opportunities for the Weekend and Beyond!

Volunteering can be life-changing. When you participate in volunteer opportunities you will learn new skills, make new friends, strengthen your community, spice up your resume and improve lives, often all at the same time.

Or…from the All For Good homepage you can link to a list of volunteer opportunities in Atlanta, Austin, Boston, Chicago, Denver, Houston, Los Angeles, Miami, Nashville, New York, San Diego or San Francisco.

If you are an organization that relies on volunteers and are looking to recruit volunteers, then visit the new All for Good website to find out how they can help.

Any one of us can make a difference in the world and leave it a better place. We can not underestimate the far reaching infinite effect on the world of just one person making the choice and doing something good. So if you are looking of ways to make a difference this weekend (or any other day in the future for that matter) and affect the lives of others in a positive way, check out All for Good.

And, remember…Feed Your Good Dog so you good dog always wins!