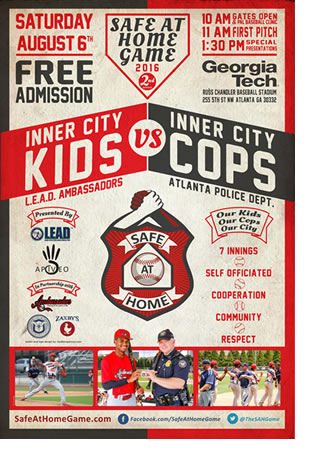 On July 5, 2016, the Atlanta City Council proclaimed the month of August Safe At Home month in recognition of the success of a program which culminated in the inaugural Safe at Home Game™ on August 1, 2015. The program was so successful that the organizers, APIVEO and L.E.A.D., Inc., in partnership with the Atlanta Police Foundation, and its participants committed to it again in 2016.

L.E.A.D. Ambassadors and Atlanta Police Department will compete against each other for the second time in the 2nd Annual Safe at Home Game™ on Saturday, August 6, at GA Tech’s Russ Chandler Baseball Stadium. The game is a culmination of fellowship and practice time spent between the L.E.A.D. Ambassadors and Atlanta Police Department officers during the 2016 SAH program. The goodwill that is generated by the SAH program is priceless.

L.E.A.D. Ambassador Cameron Giles had this to say about his experience playing in the inaugural Safe at Home game:

I learned that everyone is human and has different emotions. The police started to get a little frustrated when they made errors and I realized that we do the same thing on our own team. So no one should get mad at someone else because they didn’t do correctly on the field or at the plate. We should all keep our heads high and continue to have a great game.

And, Lieutenant Jim Hodges had this to say:

They were all very polite and genial. I could sense that they had hope and an idea that they are going somewhere in life. The hopelessness and its collateral effects that I normally see in kids from their neighborhoods doesn’t operate in them.

The relationship between APIVEO, Atlanta Police Department and L.E.A.D. is stronger now because of their work together on Safe at Home, and that is a big win for all three organizations, especially L.E.A.D. Ambassadors and APD police officers, as well as the families of both groups, and Atlanta’s inner city communities. Together our voices are stronger and more likely to be heard as we develop Atlanta’s next generation of leaders.

Please help us help spread the word about this year’s 2nd Annual Safe At Home Game™ and the strong support the Safe At Home initiative has received from the City of Atlanta.